Where should my dog sleep at night?

In my attempt to prepare for life as a dog parent, one of the essential things, and possibly one of the most significant points I hadn’t considered, is where my dog will sleep on the first day he arrives home.

I say he, assuming that I will be getting a male dog. I haven’t yet decided if I will get a pup or if I will adopt a full-grown dog. Ok, let me project forward to that day. So, I’ve made the decision to become a dog parent, and I’ve brought my canine (I’m considering a Manchester terrier at the moment) home. What do I do next? In this particular case, where is he going to sleep? I suppose it would depend on the size of the dog and whether it’s a full-grown dog or a puppy. I’m guessing that there will be a lot of nuances to address when this problem presents itself.

Where should my dog sleep? 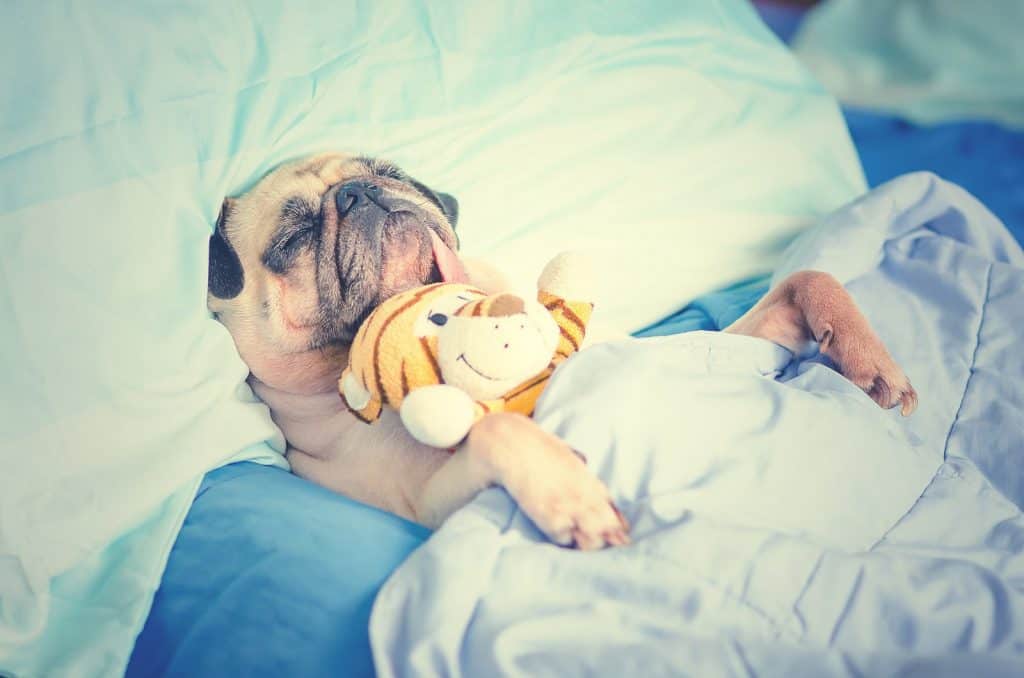 Will he sleep in a kennel or a dog crate? In a dog bed or a dog sofa bed? Yep, dog sofa beds do exist. Will he sleep on some cushions? Or will he sleep in my bed? Where do dogs even find it most comfortable to sleep? Just as you do when you need to get some advice and questions answered fast, off to Google we go.

I came across some interesting opinions given by the owners of medium-sized full-grown dogs. So, at this stage, I’ll just assume my soon-to-be dog Buster (fictitious name), is a medium-sized dog. Also, because I hope to have him for life, it means that I’ll have him for a more extended period of time at his full canine size than as a puppy. And this, taken to the next level, means that the decisions I make today can’t be taken lightly; they are for life.  This is why I think that learning about where medium-sized grown dogs sleep may be the biggest benefit right now.

Some interesting comments I found on MumsNet website highlighted some surprising and very interesting approaches that people have used to address where a dog sleeps. Check out the comments from the forum the MumsNet in direct response to the question, “where does your dog sleep?”

MumsNet forum responses to where should my dog sleep at night, 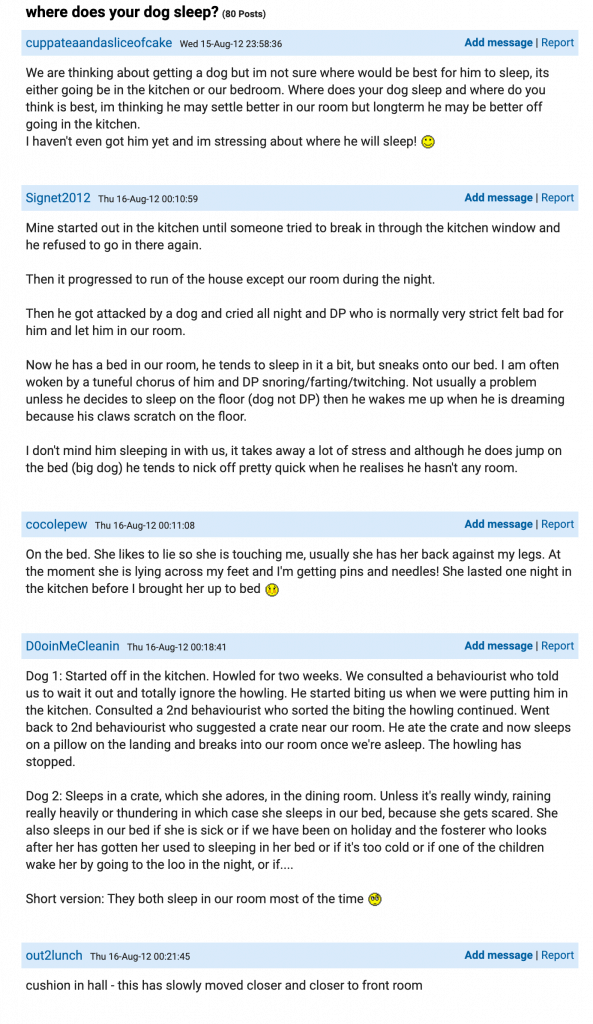 Should you let your dog sleep with you? and  What are the pros and cons of allowing your dog to sleep in the same bed as you?

I also found a YouTube video that weighed the pros and cons of having a dog sleep in your bed.  It was interesting to discover that some people allow dogs to sleep in their beds. The general opinion is split almost 50/50. That is to say, approximately fifty percent of people who commented allowed their dogs to sleep in their bed, with the other half of people who commented being against the idea.

Some of the comments of the video include 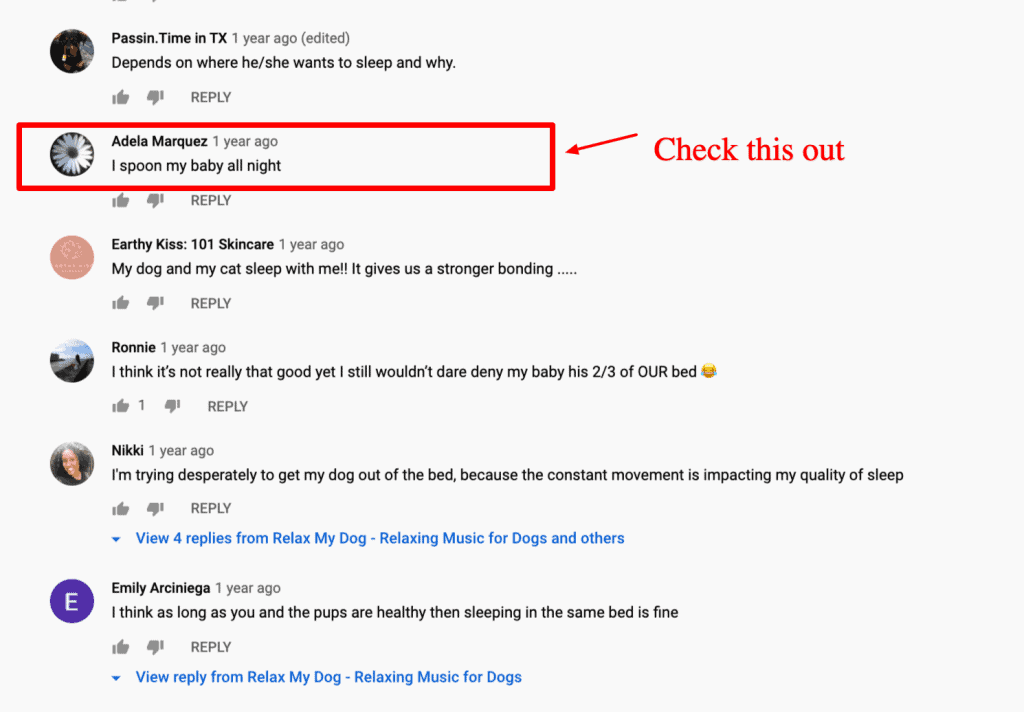 Can my dog sleep in my bed?

I’m surprised to discover how many people actually allow dogs to sleep in their beds. I have several concerns about allowing a dog to sleep in my bed. These include things like the disruption of sleep, the potential allergies that a dog may bring into my bed, and, most importantly, the imbalance of the social pack hierarchy. I can’t allow Buster to think he’s boss now.

Another video I came across showed a dog owner who had set up a sleeping area with cushions for three dogs. He also wrapped his dogs with blankets to make them feel cozy.

This approach resonates with me to a far greater extent than letting a dog sleep in my bed. I think I will get my dog his own dog bed and blanket and make it really comfy and cozy for him. Just writing this thought down makes it sound and feel right.

I think that giving my dog his own bed will create an essential line of demarcation which marks out the social and pack hierarchy. Also, my dog would want to rest during the daytime; therefore, by having his own designated rest or sleeping area, he can have a nap whenever he feels like it. Furthermore, I wouldn’t want to have to be worried about hurting my dog when rolling over at night, so my bed is 100 percent out of the question. I love my sleep too much.

Ok, for those of you who think I’m discarding the idea without trying it; well, can you blame me? I read somewhere that letting your dog sleep in your bed is not a new thing and that the practice of family dogs in the bed of humans historically dates back some time. Apparently, it allows humans to bond with their dog to such an extent that you can literally feel the love. Nice. The 60s and 70s rock band Three Dog Night took their name from the Eskimo practice of, on very cold nights, bringing dogs into their igloos to sleep with them. Depending on how cold the night was would determine how many dogs were brought into the igloo. If it was extremely cold on any given night, then it was a three dog night.

In one of the comments from the MumsNet Forum above, someone said they like to spoon their canine. Cough, cough. LOL. Okay. No further comment from me; who am I to judge? 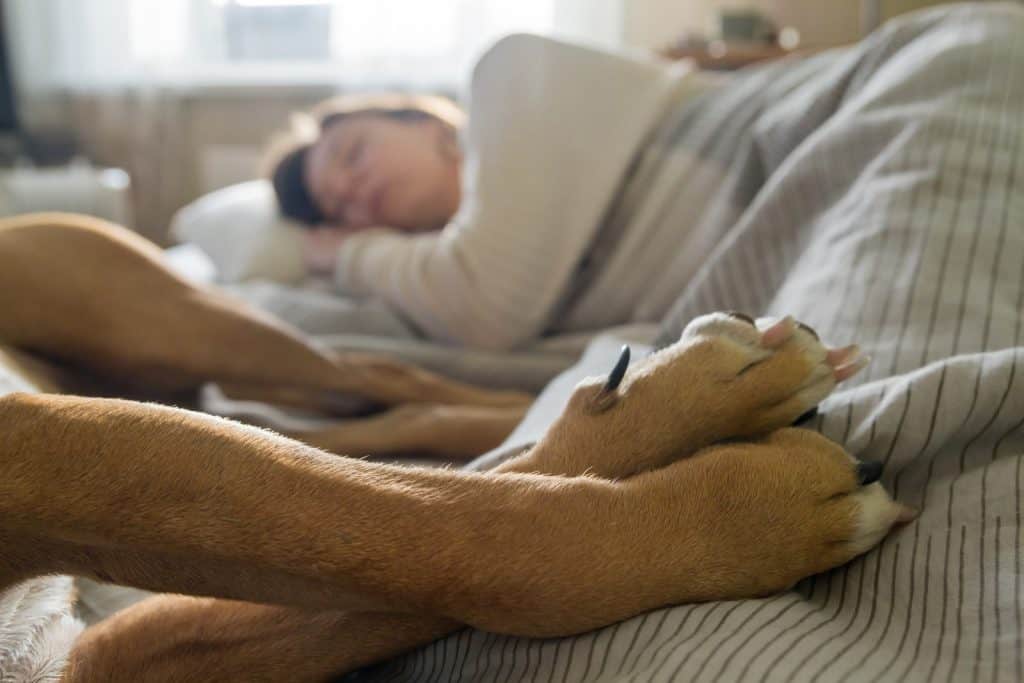 Let’s say I did allow Buster to sleep in my bed. This idea of a dog sleeping in my bed would certainly take getting used to. I came across an article in Thebark.com in which a dog parent described the experience of a dog sleeping in the bed, and having to tussle with the dog over the quilt covers and compete for space in the bed. Hmmmmm. I don’t know about that. Yes, I certainly want a dog that I can bond with, but I think having to argue and wrestle with my dog over who has the most space in the bed or who is entitled to the most use of covers is a bit of a stretch.

Another point to consider is how my partner would feel about having to share a bed with a dog and me? The Thebark.com article also went on to say that some dogs snore. Ooookay. Well, if that’s case, then we most definitely have to consider our sleeping arrangements, buddy.

Practical solutions that answer where should my dog sleep 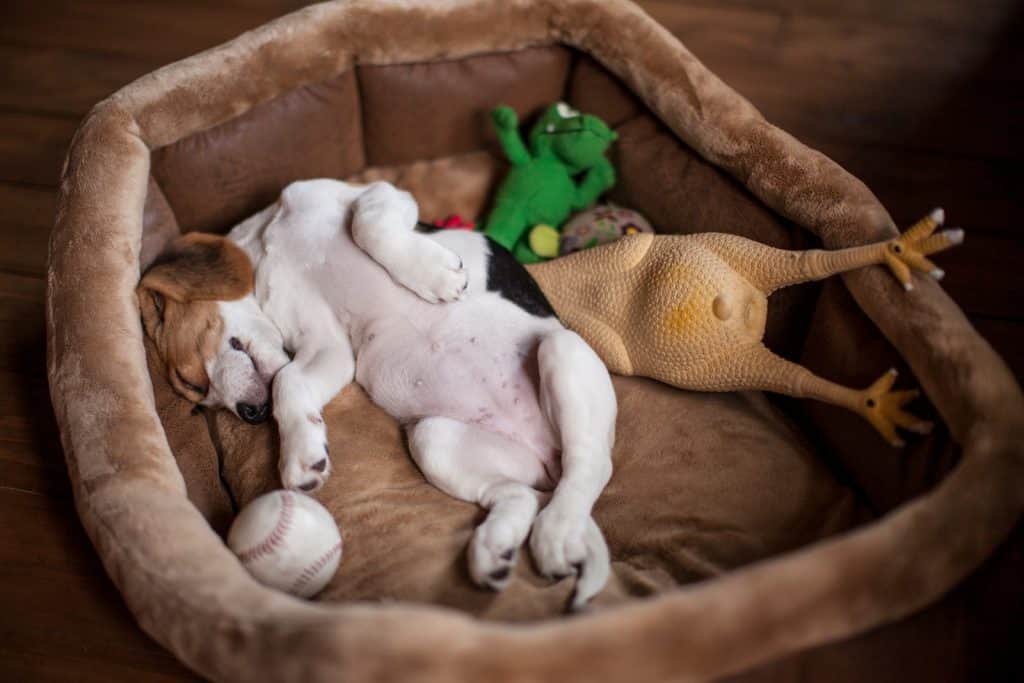 I vaguely remember the period when I lived with my brother when he got a puppy. My brother would arrange some cushions on top of a dog bed for Queenie, a place where she would rest during the day and sleep at night. I can’t remember if Queenie was his second or third dog, but I am certain that she was his first dog from a puppy phase. I don’t think the sleeping arrangement was planned or pre-arranged. I believe that he just did what he thought was logical at the time. I do remember that Queenie’s designated area would always have a chew toy. Well done, bro. I think I’ll take a leaf out of your book on this one.

So, what I’ve figured out from all my snooping around (pun intended) is that finding a place for your dog to sleep is not so simple, and it depends on the strength of the bond you have with your dog. You can design and designate where your dog sleeps. There are a variety of dog bed options, from your basic everyday bed to the high-end luxury faux-fur dog beds. I’ve also learned that a lot of people permit dogs to sleep in their beds, which I was really surprised about, although I seriously doubt that this is something I would permit for my dog.

I personally believe that a dog’s sleeping pattern should mean a dog has his own designated to sleep.  Most importantly where my dog sleeps at night should be a comfortable area that allows him to feel settled and comfortable.  This will certainly not be my bed. None the less, I’ve learned that the solution ever dogs caregiver chooses is based on a particular set of variables that changes from person to person, such as how big your dog is, pup or grown, how long you’ve had your dog, what type of bond you have with your dog, what breed your dog is. The list could go on and on. But for me, no dogs allowed in my bed, and definitely no spooning.

Where does your dog sleep?